Perfect for gifting, this set provides all three books in The Virtue Chronicles series in one beautiful box!

Written for 10-14 year olds, The Virtues Chronicles follows the adventures of 12 year-olds Andrew Perry and Eve Virtue as they deal with the mysterious Radiant Stone – an ancient jewel with the power to send them back in time. The legends of the Stone, and the remarkable history of its discoverer, Alfred Virtue, unfold from story to story in a series that explores the many saints and sinners who have impacted history.

Andrew Perry likes history, but he never expected to experience it firsthand.

But that’s what happens when he meets the unusual Eve Virtue, a direct descendant of the explorer and entrepreneur Alfred Virtue. Eve has uncovered Alfred Virtue’s greatest secret: the mysterious Radiant Stone. Before Andrew knows it, the two of them are in twelfth-century England, caught up in the adventures of the saintly outlaw Robin Hood.

In The Warrior Maiden, the second book of the series, Andrew and Eve have just returned from their time with the legendary Robin Hood in 13th century England (told in The Saintly Outlaw). But their return isn’t easy. Through an accidental touch of the Radiant Stone, the two are transported to 15th century France. Without the Radiant Stone in their grasp, Andrew and Eve don’t know how they’ll ever return to the present. Yet they cling to the hope that they are in the past to serve a purpose. Circumstances bring them into the company of the young Joan of Arc as she seeks to fulfill God’s mission to overthrow English domination and make France’s volatile prince into the true king of France. Taken on as her “guardian angels,” the two time-travelers experience first-hand the trials and victories of the “Warrior Maiden.” At every step, they learn to trust God, even while hoping to find a way home again – and some unlikely characters may have the answer they need.

In The Hidden Heroes: Andrew and Eve must travel to Elizabethan England (16th century) to find Dr. Howard, a man from the present, who travelled there accidentally. They are immediately thrown into the danger of that time, as Queen Elizabeth and her notorious Privy Council attempt to imprison faithful Catholics. On the run, they must evade “hunters” while searching for Dr. Howard. Along the way, they meet the Hidden Heroes of the Catholic faith – Edmund Campion, Robert Persons, Ralph Sherwin and the many other priests who journeyed through England to encourage and minister to the suffering Catholics there. Andrew and Eve soon experience the harrowing lives of fugitives, persecution as Catholics, and the remarkable grace that comes in the midst of trouble. Through Andrew and Eve, readers will learn the amazing history of the English martyrs who bravely served Jesus and His Church in conditions few of us can imagine.

Paul McCusker is a writer and dramatist, best known for his work on the long-running children’s audio program Adventures in Odyssey and award-winning Radio Theatre productions for the Augustine Institute and Focus on The Family.

His published works include The Adventures of Nick & Sam first-reader series, The Virtue Chronicles series for 10-14 year olds, The Imagination Station book series, the Passages series, tie-in novels to Adventures in Odyssey, adult mysteries and thrillers, biographies, plays, and musicals.

Paul is currently Senior Director of Creative Content for the Augustine Institute in Denver. He lives in Colorado Springs with his wife, son and daughter. 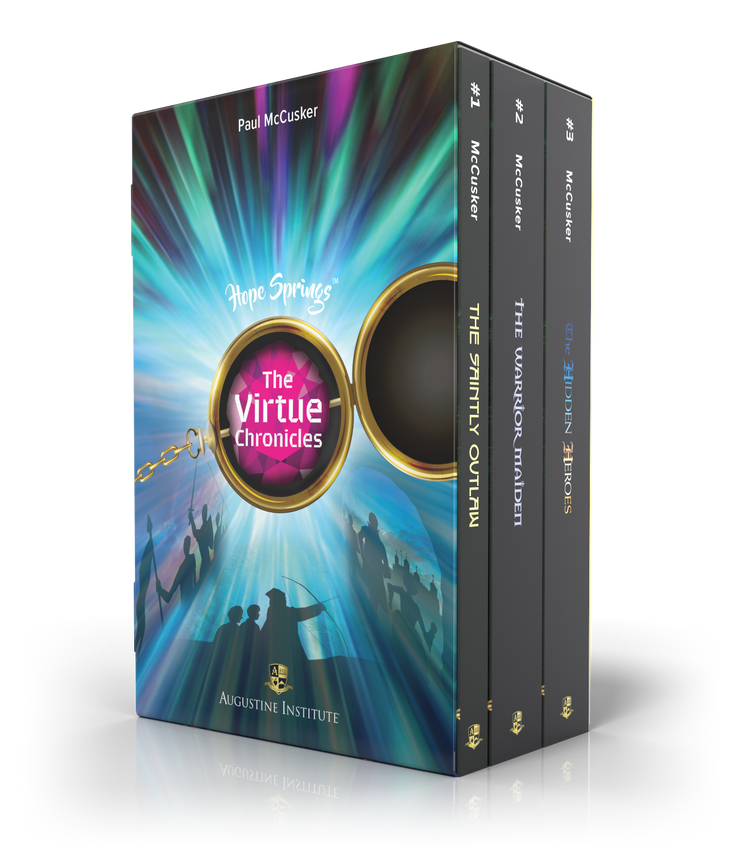