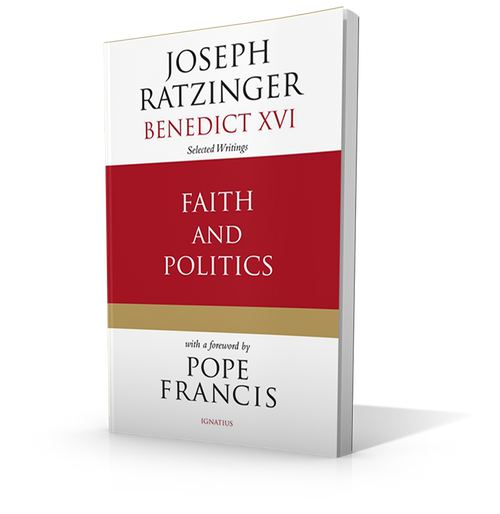 Pope Francis, in his foreword, states that one of the major themes in the thought of Joseph Ratzinger is the relationship between faith and politics: "His firsthand experience of Nazi totalitarianism led him even as a young student to reflect on the limits of obedience to the state for the sake of the liberty of obeying God."; In support of this, he quotes from one of Ratzinger's texts presented in this volume: "The state is not the whole of human existence and does not encompass all human hope."

Ratzinger explored various aspects of this subject in books, speeches, and homilies throughout his career, from his years as a theology professor to his tenure as Prefect of the Congregation for the Doctrine of the Faith and most recently as Pope Benedict XVI. This is the only book that collates all of his most significant works on political themes inside one volume.

Joseph Ratzinger (Pope Benedict XVI) is widely recognized as one of the most brilliant theologians and spiritual leaders of our age. As Pope he authored the best-selling Jesus of Nazareth; and prior to his pontificate, he wrote many influential books that continue to remain important for the contemporary Church, such as Introduction to Christianity and The Spirit of the Liturgy.


Praise for Faith and Politics

"Ratzinger writes with penetrating intellect and tranquil confidence in the Gospel of Jesus Christ. This marvelous volume reconfirms him as one of the greatest Christian minds of the last century."
— Charles J. Chaput, O.F.M. Cap., Archbishop of Philadelphia

"This book will be of enormous value for all Catholics involved in public life as well as for students of ethics and political theory. Ratzinger's works have a classical quality whose relevance does not date."
— Tracey Rowland, Ph.D., STD, Saint John Paul II Chair of Theology, University of Notre Dame (Australia)

"Joseph Ratzinger shows how politics has been—and will be—inadequate, sometimes even dangerous, when it neglects the larger human context offered by faith. And not just any faith, but specifically a faith rightly informed by the theological and philosophical truths that have marked the Judeo-Christian tradition for millennia."
— Robert Royal, Ph.D., President, Faith & Reason Institute

"Ratzinger's works display his usual acuity and profundity. Especially the first four pieces on Christology, salvation, and history are instant classics of theological reflection. The human quest for political order is honored and yet perfectly relativized in the light of revelation."
— Russell Hittinger, Ph.D., Warren Professor of Catholic Studies, University of Tulsa

"Throughout his writings, Ratzinger shows his familiarity with the classical writers, the essence of Scripture, and the historical experience of man's relation to various types of civil powers. To weave these strands together in a coherent whole is the essence of the Catholic mind, no better displayed than in these reflections."
— James V. Schall, S.J., Emeritus Professor of Political Philosophy, Georgetown University

Finding the Fullness of Faith (MP3)

The Catholic Faith from A to Z

Doors in the Walls of the World

The Fragility of Order: Catholic Reflections on Turbulent Times

Why Humanae Vitae is Still Right

Made for Love: Same-Sex Attractions and the Catholic Church (Paperbook)

Men, Women, and the Mystery of Love (Paperback)

By an Unexpected Way